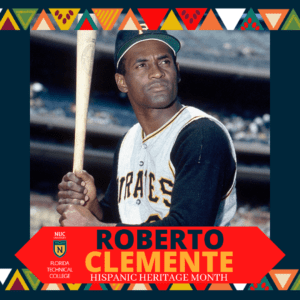 “Always, they said Babe Ruth was the best there was. They said you’d really have to be something to be like Babe Ruth. But Babe Ruth was an American player. What we needed was a Puerto Rican player they could say that about, someone to look up to and try to equal.”

Roberto Clemente is known as one of the greatest baseball players of all time. Not only did he receive the Most Valuable Player Award, Clemente received 12 Gold Glove Awards, 12 All-Star Game selections, 4 National League batting titles,  2 World Series Championships, reached the 3,000-hit milestone, and was the first Hispanic Hall of Famer.

Born in Carolina Puerto Rico, Roberto Clemente was the son of a sugar cane worker. At an early age of 17, he played for the Santurce Crabbers of the Puerto Rican Baseball League. The Los Angeles Dodgers signed him just the following year on the Minor League Team after seeing his inevitable potential. In 1956, he batted at .311, but struggled from many injuries and language barriers. In the highlight of career in 1971, he batted a remarkable .414 and hit two home runs, giving the Pirates some of the most impressive results in World Series History. Throughout his baseball career, he was a passionate and fierce advocate for the Hispanic and Black communities and stood up for minority rights.

Clemente was always known as a “quiet gentleman” on the field, and a caring, generous person inside and out. He was always took initiative to be involved in his community. One of the noteworthy community-involved actions he took was organizing and hosting a baseball clinic for children where he taught and mentored young aspiring athletes.

Clemente even took the lengths to fly supplies to Nicaragua after an earthquake catastrophe in 1972. On his way there, he was involved in a terrible plane crash, and his body was never recovered.

“Everyone knows I’ve been struggling all my life. I believe that every human being is equal, but one has to fight hard all the time to maintain that equality.”
-Roberto Clemente

This month, we commemorate him in honor of Hispanic Heritage Month.